I've installed juliaup from the MS store, but it's not in PATH

According to the Github repository, if I install juliaup from the Microsoft store, using the link provided in the repository page, both julia and juliaup should be present in PATH. But instead, none of them is available. The julia program itself is installed and can be launched using the icon from the start menu, but if I launch julia or juliaup from terminal, they’re not found. I guess I could add them by hand to PATH, but I don’t know where the executables are located.

Note that I was able to find the juliaup location by right clicking the icon that appears in the start menu and I added it to PATH by hand. But julia itself is still missing and I don’t know how to find it, because it is a Windows app and it doesn’t seem to have an accessible folder location. 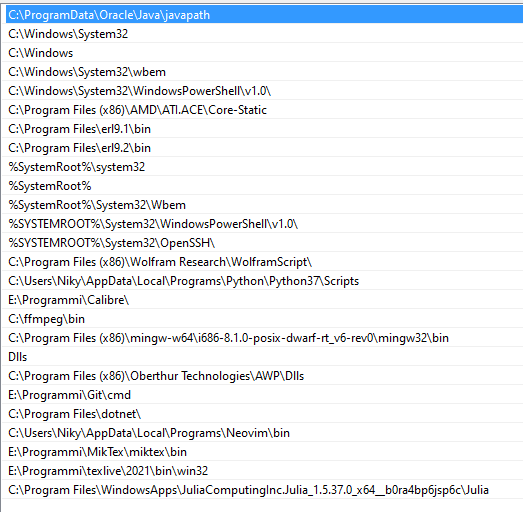 Actually, I did find the julia folder of the current version of julia: the problem is that if I add that julia.exe executable, I would end up with calling a specific version of julia when using the command from terminal, which would make juliaup pointless, because I would have to update the PATH variable everytime there is an update.

I think something has been messed with your system settings. In a normal Windows install, the folder %USERPROFILE%\AppData\Local\Microsoft\WindowsApps should always automatically be on the PATH, but it looks like that is not the case on your system. That is the root problem here, if that folder is not on the PATH things won’t work. Easiest fix is probably to just add that to your Path variable in the User variables part of the environmental variables UI.

You should not add the folder that you found in the filesystem to the PATH, that won’t work, nor should you add any other folder manually.

That solved the problem! Thank you very much. Not sure why that folder wasn’t in PATH. Weird.

How do you do that? I can’t find an environmental variables tab or option in any of the menu drop downs. maybe you could include some screenshots?

If you are asking how to edit environment variables on windows 11, type “environment” in the windows search menu 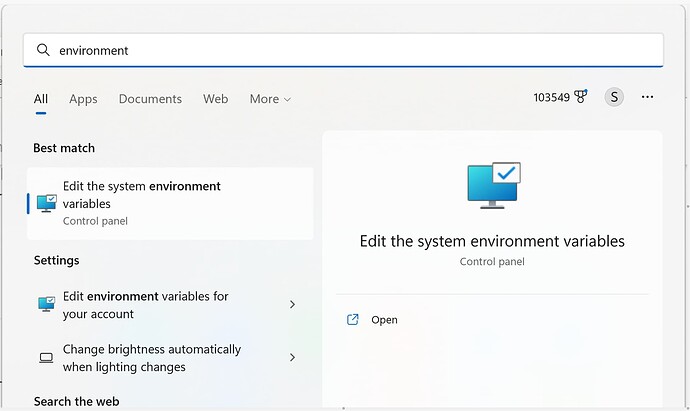