I would personally really like efforts to be directed towards SIMD implementations of special functions.
Optimal SIMD and serial definitions are likely to be different, as the former ought to be branch-free.

Okay. Despite the name, SLEEFPirates is open for PRs that include implementations other than SLEEF ports, so perhaps a new library for SIMD implementations isn’t as needed.

EDIT: I’d also like to point out that @musm deserves all the credit for the the real work behind SLEEFPirates.

Note that Numerical Recipes has a very restrictive software license which means that no code from the book can be used. And basically you shouldn’t even look at the code. (Yes, that is ridiculous. But the code is pretty unreadable anyway.)

+1 for implementing special functions in Julia, but it’s (much) harder than it appears.

This seems to be a good, recent reference: 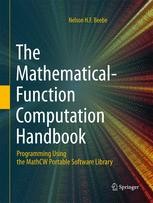 But the actual code for the library he describes is LGPL.

Implementing various special functions under an MIT license is a perfect idea for a GSOC (JSOC) project: it is well-defined, has immediate results, and valuable to the community.

I would recommend just starting from the literature, instead of looking at code with a license that is not compatible with a permissive one like MIT. Most libraries cite the relevant papers anyway.

Some knowledge of numerical analysis is helpful, but testing can be done by comparing with BigFloat calculations.

Love the idea of SIMD optimizations for special functions, but we can’t omit generic fallbacks. A big advantage of implementing these in Julia is automatic differentiation, and SIMD optimizations are a disadvantage for such purposes. Now, a SIMD-optimized dual numbers implementation…

A big advantage of implementing these in Julia is automatic differentiation

SpecialFunctions is pretty much already covered by AD rules, so I don’t think it’ll do much here.

Good point. It’s worth keeping mind, though, for the day when someone implements pFq(a1,...,ap; b1,...,bp; x) (generalized hypergeometric function).

I looked at Gil, Segura, and Temme (2007) and it looks like another useful reference.

Some general thoughts about a native Julia package:

I’m not sure why a package can’t be both a wrapper for openspecfun and also have native julia implementations. There are already a bunch of native implementations in there, and it seems simpler/less confusing to keep things together.

As far as my research on this goes, I will be creating my own repositories and not do GSOC or contribute to existing repositories. I work from first principles and do a completely original implementation from scratch, and will not want the hassle of dealing with a committee (as an unpaid volunteer, I want 100% full control of my repo). Also, my default license will probably be AGPL.

Mmmm, if I may be so bold, let me say one thing… If some of the people around here were willing to act as a committee in any endeavour of mine and offer their expertise to me for free I would be on cloud nine, to be quite honest

. I used to think a bit like you in this respect, but then I discovered open source. I’m not interested in being in full control anymore, just want to share.

But back on topic, I agree a SpecialFunctions replacement is a key piece in the ecosystem, and deserves a good deal of attention to make it top notch and remain maintained. I’ve used it more that once in the past and found it very good. I didn’t even realize it was not pure Julia.

I’m not opposed to receiving guidance and free help from the community, I just dont like being required to answer to a committee when I’m a volunteer, as an obligation. Service obligations like that require payment.

I just dont like being required to answer to a committee when I’m a volunteer, as an obligation.

I don’t think anyone expects that from you so no need to worry :). And if they do, what leverage do they have heh.

Apparently the wrapper for openspecfun (SpecialFunctions.jl) just wants to remain that.

Whether to separate wrapper and native libraries is a matter of style/preference. Personally I find it cleaner for many reasons, one of which is versioning: for a wrapper package you mostly follow changes in the library that is being wrapped, and aim for feature completeness, while a native library is more open.

Given how lightweight Julia packages are, I usually keep things modular unless there is a reason not to.

Apparently the wrapper for openspecfun (SpecialFunctions.jl) just wants to remain that.

SpecialFunctions already is more than just a wrapper. There are a couple of native implementations in there.

openspecfun itself doesn’t really change anymore, but I suppose it would be fine to make an OpenSpecFun.jl package and have SpecialFunctions depend on that. To me it doesn’t seem worth the effort though.

My point was mostly about the segregation of the functions. It’s nice having a single package where people can go look for these things.