I like raytracing and there are a nice set of books

so now I’m a bit better at Julia, I transcoded the C++ into Julia and got some nice speedups.

(The C++ had no compiler flags, after using -O 3 and -march=native it was down to about 1 minute)

And when I added Threads (40 of them

)I got it down to 15s, including compilation.

Sorry for the noob question, does your Julia code produce images like the one in the “Ray-tracing in one weekend” book?

yes, that exact one (modulo the rand()s)

Yes, I’m quite pleased. I wasn’t doing it to make it faster, I just wanted it to produce results

FYI, searching through Discourse, there seem to be a few related threads. I’m linking one of them.

and note that you don’t need to define magnitude, actually you have:

and also you could do:

magnitude(x,y,z) is quicker than norm([x,y,z]) because of the extra allocation

norm is a strange name too, Shirley had length and I don’t like that either

that randf is cool too, but again, it creates [x,y,z] not x,y,z
and this is all about reducing those allocations

I moved the code, git was being annoying with the fork

If you use StaticArrays none of these allocate.

it was still slightly slower

There’s no reason why Julia is so much slower, (not GC, not String, not I/O, not byte wrangling), well I know it’s easy for me to say it… But I hope we could make it within 125% time of C++. This is a micro benchmark big enough that people can point to as “composite” test for suitability blah blah

Again with 40 threads. I’m not going to chase more performance for the moment - that’s not the purpose of this - although I hope to experiment with some GPU offloading perhaps. I can’t use any CPU specialisations - Julia complains about a missing cx-16 instruction when I try and use -C 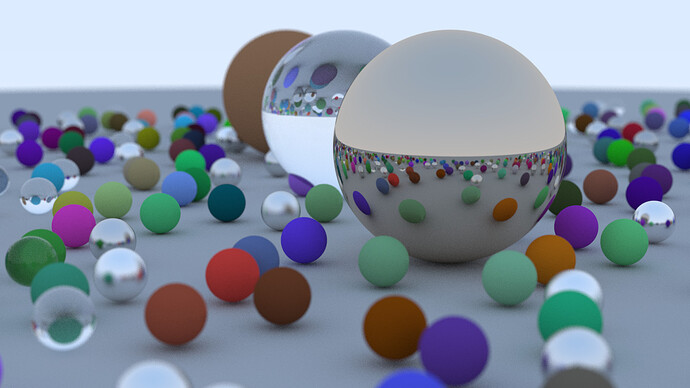 Your example has 24GB allocations and 15% GC time. Thats probably the problem. You could preallocate all the arrays used for each thread and reuse them. That much allocation will probably reduce your cache performance too.

yep, but I think that’s quite a bit of re-work

Turned out the design needed me to do the work of per thread anyway.

I used 2 muitable structs to hold the intermediate results, this reduced allocations significantly.

and only 1 second wall for the 40 threaded version

I should take my own advice and try it but are mutable structs significantly slower than if I had a set of these and updated them ?

Immutable is usually better, but more importantly, type-stable is best. You need to run Cthulhu.jl and ProfileView.jl on everything and get rid of instabilities. At a glance, Material is an abstract type, but you have it as a field type. Instead maybe use a type parameter M, or if you need to mix materials in a vector, dont use a type to specify them at all.

Just to let you know, I’ve been playing with your code too: https://github.com/cdsousa/ShirleyRenderer.jl

One thing I noticed is that having 1) Materials as an abstract element of Sphere and 2) a vector of abstract Hitables in Scene, kind of hits a sweet spot in the compiler which produces a well-optimized code.