In VScode, if I type θ \hat tab then the hat comes after the θ but the variable is usable.

If instead I type \hat tab θ I get the hat sitting on top of the θ but Julia gives an error.

This issue is not specific to Greek characters: the same happens with x.

Is there a setting in VScode that I could change to make it both look right and not produce an error message? (I’ve looked but failed to find) Thanks!

What font are you using? If I type x \hat it produces the correct unicode character. This might seem like a font issue to me.

Thanks! (‘Droid Sans Mono’, ‘monospace’, monospace, ‘Droid Sans Fallback’) which I suspect is the default. I’ll experiment, but what is the font that you are using @affans ?

That definitely is a font issue. I’d recommend giving the excellent JuliaMono a shot.

JuliaMono seems to be a fan favourite, but I use Cascadia.

It shows how different monospace fonts compare for math symbols.

θ \hat should work, but I don’t think \hat θ will, because hat needs a character to sit on.

You can stack these too, so x \dot \vec should work (in the VS Code editor), font permitting.

If instead I type \hat tab θ I get the hat sitting on top of the θ but Julia gives an error.

Realize that this is not really LaTeX. You are not typing \hat{\theta} and having it typeset.

In addition to not rendering the way you want, putting the \hat first is not a valid Julia variable name — valid variable names must not begin with a combining character.

Hi, I’m a bit late to this conversation, but I still have some questions. I had the same problem as OP with Droid Sans Mono, and I’ll try out some other fonts.

I think this massive thread provides enough evidence to discourage the use of unicode characters in identifiers in computer code.
Example?

lol - But I don’t think this argument is very persuasive. We don’t ban scissors merely because it’s possible to cut yourself with them. Instead we teach and advise how to use things safely, just like we would advise programmers not to use easily-confused capital Greek letters for variable names (such as Μ, U+039C) – without at least documenting their folly!

I started investigating this, but got a bit bogged down and wasn’t able to come up with a definitive explanation.

I made this graphic in an attempt to explain what was going on: 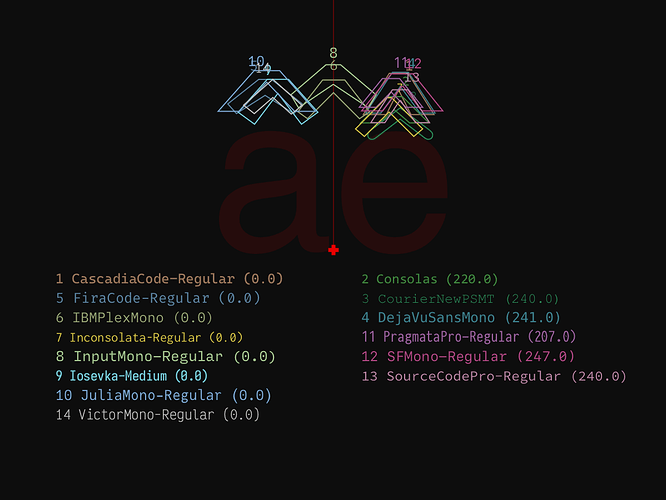 Basically this works through a number of monospaced fonts and draws the U+0302 combining circumflex accent from each one. The central red cross is essentially the current position or ‘cursor’ - usually the bottom left corner of a typical character. You can see that fonts generally fall into two groups. The first group place the circumflex to the left of the cursor, ie over the previous glyph, and the second group position the circumflex to the right, ie over the next glyph. There are a few fonts that appear to do neither. Not shown are some fonts that don’t have this character at all - Anonymous Pro, Roboto Mono, JetBrains, etc…

The numbers are the X-advance value of this glyph - which in theory defines the width of the character. For the first group, because the width is 0, the next character appears at the same place - there’s effectively no advance forward. (I think this corresponds to what the Unicode specification says.) In the second group, there is an X-advance value, so these are - in theory at least, not zero-width glyphs. But, to make matters more complicated, the text rendering software (ie your terminal or editor, or the OpenType text-rendering layer) may or may not take notice of the varying X-advance values - the “monospaced context” overrides any positioning instructions.

The problem starts, of course, back when the font is designed. Some font design applications set the width of these combining characters to zero, even though the graphics obviously have some width. Other programs allow these characters to have non-zero widths…

I think the group on the left provides the correct behaviour. But I’m not 100% sure.

Well, I got this far, then kind of gave up. Fonts are tricky…

Anyway, unicode variables are a must in maths-heavy code. It’s absolutely indispensable.

This is patently wrong: there are thousands of mathematical libraries that contain not a single unicode character. What makes them legible (or not) is not the characters, it is the software design.

Again, not impossible. It has been done many times already. BTW: if you say it is crucial to employ unicode, you should be able to point to at least one library that demonstrates this. Can you?

You claimed it was impossible. You prove it.

Hence it is possible. QED

Listen. I guess you’re not that used to tongue-in-cheek hyperbole. I’m clearly being over-the-top and deliberately irrational.

My point is, I’ve written a bunch of mathematical codes without unicode, and it really, really sucks. When I am able to bring in a sprinkling of Greek letters, and maybe some other decorations, it cleans the code up dramatically. It’s a real life-saver, it doesn’t just make the code easier to understand, and much more concise, it also reduces typos and bugs, even mathematical errors.

As far as I’m concerned, unicode symbols in computer code is the best invention in the history of the universe, and I won’t let anyone tell me they’re a bad idea.

I have written a lots of code with math, and I never needed a unicode character.
Introducing characters which look the same but have different meanings into the code
is a bad idea, period.

and I never needed a unicode character.

Yes you did, you just didn’t realize it

Introducing characters which look the same but have different meanings

Doing that would be terrible. But your example didn’t demonstrate this, probably because you forgot to mutate inside f!.

Definition: Maths-heavy code is code that is unreadable without unicode symbols.

It follows that one cannot write readable maths-heavy code without unicode.

This thread was about accented characters.