But when I use VS code remote (as indicated by the green ssh note in the bottom left corner of vs code), I get this error:

Ok, so one needs to go to Extensions search for julia and then ‘Install in SSH: …’.
Apparently the SSH environment is separate (which makes total sense). 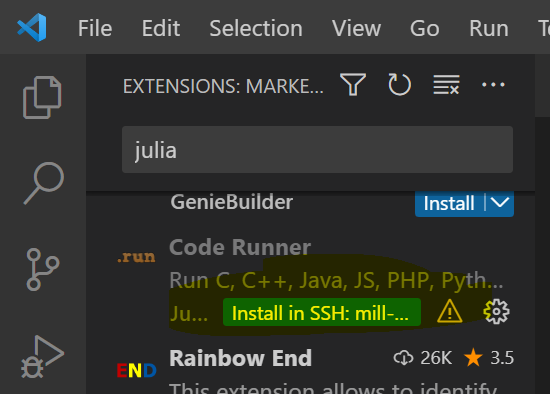 Somewhat related, in case you will want to access network drives: link

If your user is an admin, things seem more complicated. When I ssh into the remote machine (all Windows 10/11 computers), I am automatically elevated/admin. I am not aware of any way to get rid of this. Thus I need to use net use to connect a network drive. This, annoyingly, asks me for the password even though my user has access to the network resource (on a Windows Server OS)…

So it works fine for non-admin accounts?

I have a similar situation and when googling it appeared that SSHing into Windows creates a new session that doesn’t have the network drives attached.
I also use NET USE and I think it’s semi-stable - as in connecting multiple times during a day does not reset the drives, but after couple of days you still need to reconnect.
I was even planning to just put the command in the SSH startup script, so it would run on connection, but haven’t gone around to do it yet.

“So it works fine for non-admin accounts?”:
I don’t know. I am admin on both machines and I want to remain admin. I can’t create a new user (would be meaningless as such new user would not have access to network resources).

Net use is cumbersome for me as it asks for the password which I don’t want to store anywhere. For me, persistency between sessions does not work

And do you have this network share mounted persistently to windows in general, e.g. through rdp?
I have a samba share that windows did not want to reconnect to on login or startup in general.

So then for my case, using the Powershell, rather than cmd commands was more stable, especially for reources that do not have per-user credentails, but per-share.
Maybe you could try (if you hadn’t yet) check if mounting it with:

or equivalent, if your share does use a different protocol?

In RDP my shares always work fine. The mount is persistent.
I noticed yesterday that a mount in vscode actually does survive a session contrary to what I wrote before. I was running tests in cmd sessions (outside vs code) where the drive mapping did not persist.

I think I am fine for now.

I may talk to my IT admin too. I think windows can auto mount the drives for my profile. In my current “setup” when I reset my profile (or log in to a computer that I never used before → new profile) the drives are not mapped. Not sure if I explained this well.

FYI.
I am encountering more hurdles.
See screenshot below.

This is a private repo, which I can pull/push just fine. The git integration in VS code works flawlessly.
But when performing Pkg.update() julia is trying to pull from a private repo (in Project.toml). This fails.

I won’t bother to try and fix this. I can simply RDP and Pkg.update().
EDIT: it would be interesting to know whether this issue occurs on a Linux system as well. If yes, we might have more people/interest to investigate this.