Don’t know if any of you have seen this or not.

It’s a competition to see which programming language produces the fastest code.

Also Julia is also beaten by Various implementations of the code in Rust, C++,Zig, Nim ,D, etc, and I’ve never heard of Zig, Nim, or D. What the he”double hockey sticks” is Zig, Nim, or D?

I am not smart enough to figure out whether it’s something inherent in the languages or if the guy who programmed the Julia code doesn’t know how to make it fast or what.

But maybe someone who is a buttload smarter than me can look at this and move Julia higher up in the rankings. 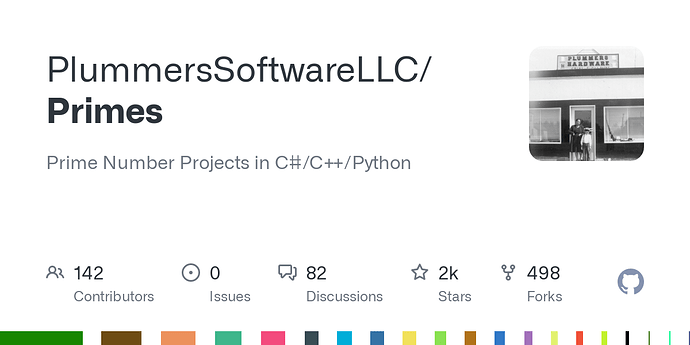 Prime Number Projects in C#/C++/Python. Contribute to PlummersSoftwareLLC/Primes development by creating an account on GitHub.

To show you how old I am the only Programming Course I took was a FORTRAN 66 course in ~1968. I did FORTRAN until about 2000 when I switched to MatLab and used that until I retired in 2012.

Another discussion of this here: [YouTube/GitHub] What is the FASTEST Computer Language? 45 Languages Tested