Julia running in background (VS Code)

First of all thank you and congrats on making Julia in VS Code such a smooth experience.

I’ve noticed there is a Julia process permanently running in the background, even before starting the REPL. It is using about 20% of my CPU power (so a full core of my quad-core). Is this intentional? 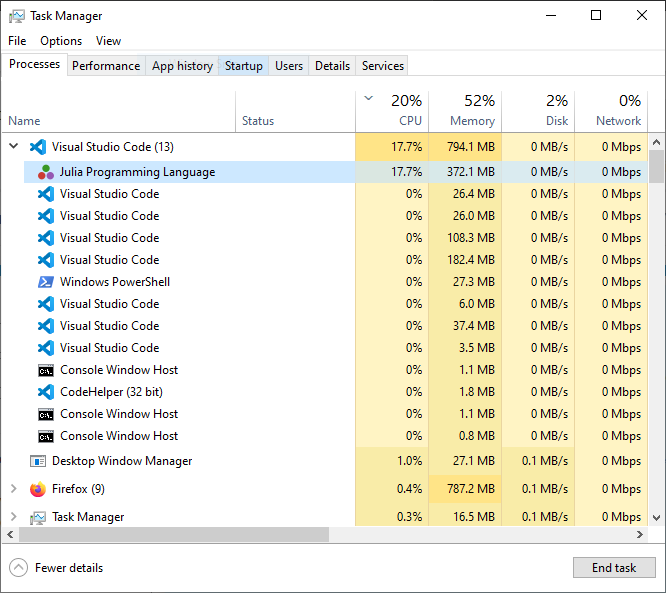 That Julia process runs the Julia language server, which is needed for all the code editing experience that the extension provides. It will initially parse all the code in your work space, but at some point it should certainly not continually use 20% of CPU. Does this go down if you wait a while?

Unfortunately the Julia process remains between 17%-20% continuously. My workspace currently has 12 .jl files, all of these together make about 1200 lines of code.

That seems like a bug… Is there a chance that you could share the content of that folder with me? If you don’t want to share it publicly, you could also just send a zip file via email or something like that.

One other option: it might also be symbol server process, which is a second Julia process we start. Does the status bar in VS Code show some UI that says that it is indexing packages?

Reading the other posts in this section I have found what the problem is. As stated here, when the same “include” is stated in multiple files the Julia language server acts like crazy.

This might be the source behind other cases of the Julia language server issues (stated in this discourse and the github repo), is this a bug or “including” in multiple files is a practice that should be avoided (or both)?

The problem is I can’t reproduce that bug (which we have reported a couple of times now…). If there is any chance that you might be able to just share the folder that is acting up it would probably help a lot locating the root problem here…

Personally I would still like to have an option to disable this parsing thing the language server does, I never managed to run the VS code extension properly because of it since a very long time and I always have to go hack files to disable it manually (c.f. Is there a way to disable whatever LanguageServer does at startup ? · Issue #363 · julia-vscode/LanguageServer.jl · GitHub).

@jonathanBieler I think these are distinct issues: the indexing and the parsing. They happen in different processes etc. I believe the indexing should be much more robust now, certainly it has been more or less rewritten since you last posted that issue. If there are still issues with the indexing, let us know!