I implemented a type for defining arbitrary lazy sequences that performs well, but the implementation is so trivial that I'm not sure if it's worth making a package

… so I thought I’d post it here and see what people thought.

Lazy sequences have been a point of frustration for me with Julia. Python is my main background, and I always liked generator functions, and I really enjoy playing with lazy types in various functional languages.

In Julia, channels can be used in a way similar to generator functions, but the performance is bad. Thunk-based solutions like Lazy.jl are super cool, but performance there is also problematic. Making an efficient lazy iterator in Julia requires at least defining a type and an iterate method for it—as well as Base.eltype and Base.IteratorSize for most practical cases. This seems boiler-plate-y. Required infinite Fibonacci example:

This is actually fast!

My thought was to make a type that generalized this. This is what I came up with:

And it is just as fast as the other method.

If you want a sequence that terminates, it looks like this:

This works well, but it’s still tricky to “collect” because it lacks an implementation for eltype. You can either give a type explicitly to the collect function, or you can use something like this:

Note that this is an imperfect heuristic. It can fail if the type of the state can change in such a way that will change the return types. This seems to be pretty rare in practice.

Edit: @tkf explained in a later post a better way to implement eltype:

I think so but it seems opening PR somewhere will be better. See this topic, it looks similar: Julia equivalence of Haskells unfoldr 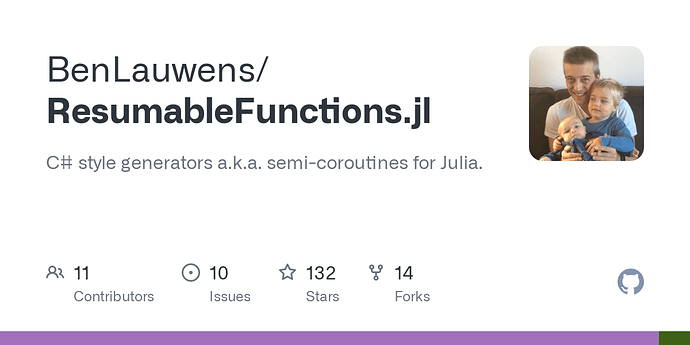 ResumableFunctions are also relatively slow–though much faster than using a Channel.

I’ve been using something like this quite often, but I never really thought of putting it into a module, since it’s really not a lot of code.

super cool type, it is in the spirit of GitHub - francescoalemanno/KernelOps.jl: Apply lazy kernel operations on AbstractArrays, they are composable and non copying. Have Fun!

I guess it’s more or less IterTools.iterated (with a post-hoc fix up using imap)?

This works well, but it’s still tricky to “collect” because it lacks an implementation for eltype .

I think the common consensus is using return_type(s) like this is wrong (i.e., changes in the compiler heuristics should not affect your API). I think a better approach is to define Base.IteratorEltype to be Base.EltypeUnknown(). collect should be able to handle it by the type-widening strategy.

Thanks for insight. Seems to work well!

I’ll check in with IterTools and see if they are interested in a type like this, as others have suggested.

Well come on then! Show us the benchmarks

Here is the output:

So, it’s like 9,000 8,000 times faster than resumable functions and the same speed as implementing a custom type.

2 ns for a loop of 100 cannot be right - the compiler probably just precomputes the result and returns it. For me any number of iterations give the same timing, e.g.

shows 1.2 ns. A way to more properly benchmark it is to put the number of steps into a variable:

2 ns for a loop of 100 cannot be right - the compiler probably just precomputes the result and returns it.

Actually, it’s probably using the closed form solution for a sum of sequential integers (if they’re non-negative, it can be computed efficiently with (n * (n + 1)) >>> 1).
LLVM often makes that transformation, and @code_llvm confirms.

That ninjaaron’s approach is generating simple enough code for LLVM to figure this out shows that it is pretty friendly to the compiler.

2 ns for a loop of 100 cannot be right - the compiler probably just precomputes the result and returns it.

Thanks for pointing this out! I reran the benchmark with start and stop as variables in each case which definitely made an impact! Here is the main function after the changes:

and here is the output:

Interestingly, the slower benchmarks improved with this change and the faster benchmarks got slower. Now, Sequence only 340 times faster than ResumableFunctions.

While that is a huge change from before and what you suggested is definitely a better benchmark, I would point out the fact that Sequence is susceptible to this kind of optimization is also significant.

Where is the Sequence module defined?

I posted most of the code in the OP, but here’s exactly what it is in the benchmarks I posted—it incorporates the change to the implementation of eltype suggested by @tkf :

I also have some implementations of map, filter, take, takewhile and a few others, but they are unnecessary, since this composes fine with the functions in Base.Iterators.

Apologies in advance for naming the struct T. I’ve been writing a lot of OCaml, which has had an impact on my coding style. The upshot is that I got the idea for this when I noticed the similarities between the iteration protocol in Julia and the API of Base.Sequence in OCaml (from Jane Street).

I posted most of the code in the OP, but here’s exactly what it is in the benchmarks I posted:

Thanks, I was missing new. I’d have to look in this more to find out why, but the code is generating a loop for both sequence_counter and CustomCounter.

FYI, here is how you implement it as a “foldable” (a counter-part of “iterator” in Transducers.jl; see Transducers.AdHocFoldable):

As you can see, it looks like Julia+LLVM figured out closed-form solution even with the $ hack. I don’t know how to workaround this (I tried start = Ref(1) instead but it didn’t work).

As you can see, you can kind of think @next as yield in Python.

Sequence (and presumably a type-based counter) seem to get into a similar optimization situation when implemented in a way that is type-stable:

I add this and your AdHocFoldable implementation to the benchmarks and got this:

It’s a bit strange that the iteration protocol is inherently non-type-stable when it has a terminal case (type is Union{Nothing,Tuple{El,State}} where {El, State}).

To get around the automatic optimization, why not simply sum a series of trigonometric functions?