I’ve been facing a somewhat strange issue using the JuliaMono font, where the Dict map character => displays differently depending on the type of the key.

I am using Sublime text as my editor, wondering if anyone else has faced this and if there’s a way to get them to appear identical. Unfortunately it doesn’t appear that the repo is being actively maintained. 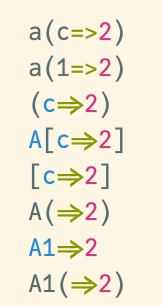 If I switch to a different syntax, say, markdown, everything displays correctly with ligatures, so there is some connection to the Julia syntax scheme. If I switch to python syntax, no ligatures are shown.

Additionally, the sequence of characters that comprise the ligature must all be part of the same token, as defined by the syntax being used to display the file.

I have no idea what these tokens are, because SublimeText’s syntax files are not my idea of bedtime reading - but it’s possible that the syntax rules are interfering with the text-shaping process.

The font-drawing process only happens once (until a redraw), so perhaps certain combinations of characters are bypassed in certain contexts? The font is probably not to blame, because it’s not doing anything very complicated (no look-aheads or look-behinds, for example).

Also from the same document:

See if the ligatures appear when using the “Plain Text” syntax for the file. If so, the syntax is likely breaking the symbols into distinct tokens, preventing a ligature from being used.