The TIOBE rankings are noisy. Previously:

Julia is Ranked 35th on the TIOBE Index Community

Last month we had a pretty massive blogging campaign, getting quite a few posts to the top of Hacker News in a month. The results of the most recent TIOBE index shows that this has made a sizable dent in the rankings: https://www.tiobe.com/tiobe-index/ We were 43rd before, and now we are at 35! In terms of the search percentages, that’s 0.2%, or 50% more than what we had before. This means that our writing about GPU computing, differential equations, and machine learning has a measurable impac…

Julia climbed to 39, the second-highest rank up to now New to Julia

Julia climbed to rank 39 in TIOBE in September, after the first long-term stable release v1.0. This is the second-highest rank up to now. I prepared a more detailed report on the language popularity trend on https://github.com/juliatrend/juliatrend.github.io The website: https://juliatrend.github.io/ Correction and updating are welcomed. Hope it could help the users to get a quick overview of the language popularity trend.

I’m not at all surprised that Java is at the top. Whenever I’m programming in it, I have search the docs 5 times per minute!

“July Headline: All time high for the R programming language”

This website shows the popularity of programming languages on GitHub over time.

We did a bunch of analysis of the Tiobe methodology here:

To summarize, Tiobe’s rankings are based on how may web page hits each language has for the phrase “$lang programming”. This methodology has severe problems. One problem is that people talk and write about different languages differently for linguistic reasons, so for some languages the phrase “$lang programming” is used a lot, whereas for others that phrasing isn’t used as much. For whatever reason, “Julia programming” just isn’t a phrase that people use to talk about Julia very much.

An even deeper problem with Tiobe’s methodology is that search engines return essentially random and frequently changing values for the number of hits on a given phrase. The number of hits reported can change massively from second to second with seemingly no rhyme or reason and it doesn’t seem like most search engines make any effort to ensure consistency or accuracy of the number of hits for a phrase. If you think about it, the question “how many web pages are there containing this phrase?” is not a really well-defined question—what exactly counts as a web page these days when there’s so much dynamically generated content? It’s also not something that search engines have much incentive to accurately measure or report since nobody looks beyond the first couple of pages of search results. Who actually cares about how many pages of search results there are?

My personal take away is that the Tiobe index doesn’t actually mean much except for the very top spots. It’s only a ranking that people talk about because people talk about it. There are a number of other indexes that have saner methodologies and are much more consistent over time, such as the IEEE Spectrum and PyPL rankings, which rank Julia as the 23rd and 26th most popular languages, respectively. Not only are these indices much less noisy then Tiobe, but their rankings also seem to make more intuitive sense.

Quite frankly that sounds like (to me) a terrible way to do ranking.

Frankly speaking, I think the TIOBE index is useless. Specially for analyzing trends month by month. The closest thing to a proper ranking that I think merits some consideration is this: The RedMonk Programming Language Rankings: January 2020 – tecosystems

RedMonk is discussed in that link and it’s a pretty good ranking, although it has some interesting biases that are quite significant. In short, it’s based on number of GitHub pull requests by language and number of questions tagged with a language on StackOverflow.

Julia does less well in terms of StackOverflow questions for a couple reasons. The first is simply that it’s been around less time. Everyone in the world could stop using JavaScript tomorrow and there would still be a ton of StackOverflow questions about JavaScript. The other reason is that a lot of Q&A activity for Julia takes place here, on Discourse. Again, languages that are used by professional software engineers who are familiar with and use StackOverflow all the time are favored, whereas languages like R, Matlab, Mathematica, etc. that are used by people who may not be professional software developers and therefore not ask or answer questions on StackOverflow so much, look less good.

Oh, I agree. RedMonk is clearly biased towards OSS. But at least the incorporate several metrics that developers might actually find useful and they acknowledge the methodology shortcomings. I don’t think is perfect by any means, but I think at least offers some information about trends.

I have always found baffling how much importance some people give to the TIOBE index given how… lazy the methodology is. But maybe Scratch is really close to taking over Ruby and I am just in denial 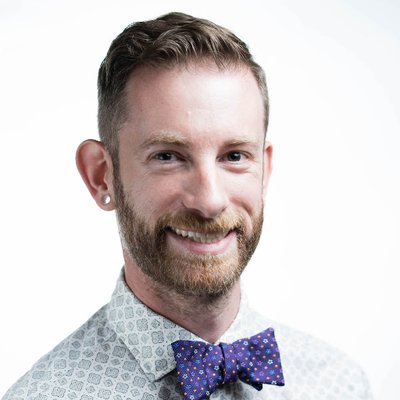 Following Julia, in that order Scratch, Dart and Rust.

Are there any new top 20 entries to be expected in 2021? Top candidate is without doubt Julia, which jumped from position 47 to position 23 in the last 12 months. Dart and Rust are other candidates, but both of them touched the top 20 already without being able to stay for a longer time. - Paul Jansen CEO TIOBE Software

It’s surprising to see this. In the last years we saw spikes in TIOBE rankings around JuliaCon. Now there seems to be steady growth. If we consider the number of hits is correlated to the number of users, I wonder what was the main channel that atttracted people: Discourse? Youtube(I think the number of subscribers doubled since JuliaCon and the MIT courses were uploaded)?
On a side note, was there a JuliaCon question in the survey regarding how people heard about Julia?

Here is julias rating over time. It seems like there was a spike in September.
https://www.tiobe.com/tiobe-index/julia/

Well, the TIOBE methodology has some issues. A few years ago a blogging push was enough to bump us up 5-10 positions. Now, though, I think it’s a healthy mix of organic growth plus us trying to sprinkle around the search phrases they do use more liberally on existing pages (see the footer here, for example) with a nice boost from 3b1b.

Growth here (on this discourse) has been steady and exponential. 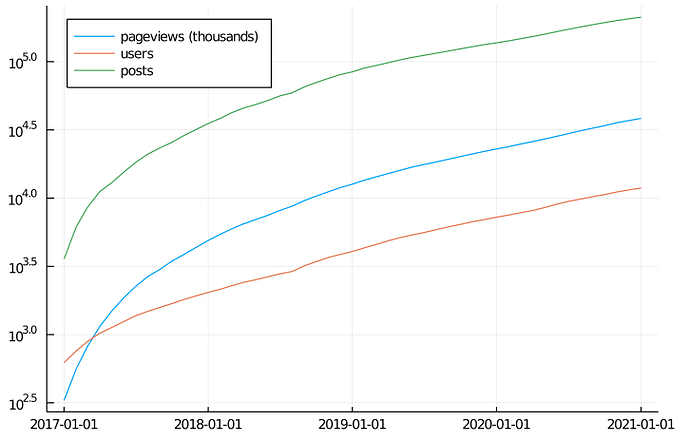 Also note that we’re up to #24 on PyPL, two spots higher than July 2020. That is also concordant with steady exponential growth. Based on the graph Matt posted, the community growth rate is 10x in about four years, or doubling about every 14 months.

If this exponential rate continues, we’ll soon dominate the galaxy!

Although to be fair, the growth rate over the last 4 years has not really been exponential. An exponential curve on a semi-log plot should be a straight line.

In fact, those curves almost look like linear growth: 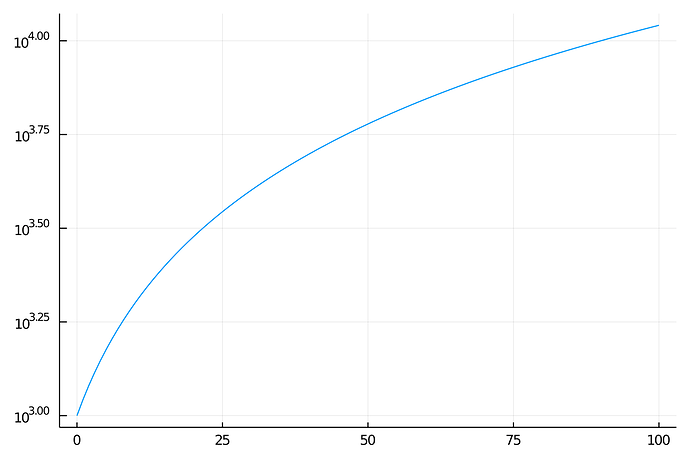 Probably a power law. Which data are you using?

That’s probably fair — I was mentally discounting the first year as the site only launched in October/November of 2016. Much of the initial growth was non-organic. But, yes, that discounting makes it easy for your eye to overfit a line.

The raw data are available to the “regulars” here (folks with trust level 3): Daily stats amenable to a cumulative tally..

Here’s a very quick and dirty plot of the last three years with linear extrapolations between the endpoints and the posts rescaled (by tens) to fit on the plot a bit better. 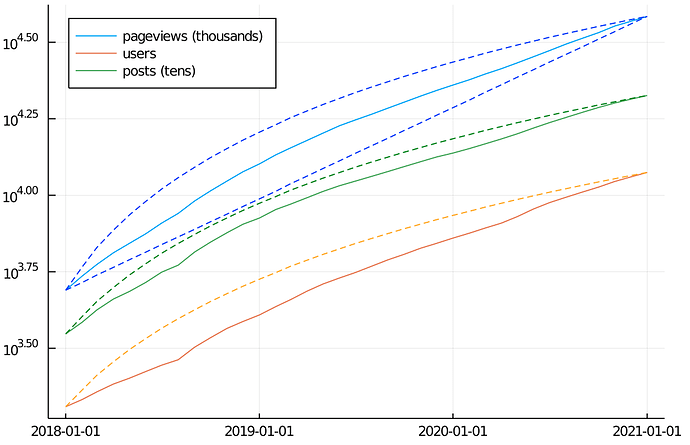 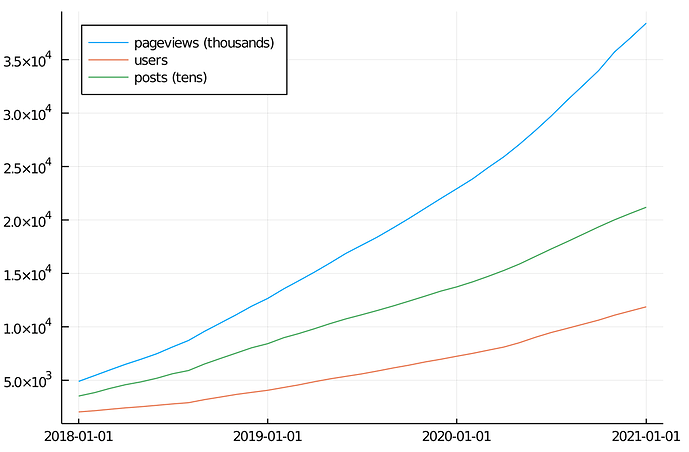