Simple is better than complex

For the following two version of Julia code, the first version is much simple and beautiful. However, it no longer works in Julia 1.
Version 1:

I know when put the code in a function it works in Julia 1. However, when using Jupyter we usually do not put every thing in the function, because global variables from different cells are very convenient.

Is it possible to make the simple version code run in the future version?

Please search this forum and the issues on github - there has been A LOT of discussion about this, for example these threads

Another possible solution to the global scope debacle Internals & Design

The infamous issue https://github.com/JuliaLang/julia/issues/28789 has been on most of our minds for a while now. Although I’ve stopped posting there, I can tell you I’ve been thinking about it a lot, as have Stefan and Jameson and others, and we have continued discussing it off and on. We should really try to get it right. Last time around, we more-or-less settled on changing only the REPL, which has the main advantage of being non-breaking for most code. But after sleeping on it, it does not …

I have an alternate, non-breaking solution to the scope issue previously discussed on discourse and github. The new potential solution is the following rule to decide whether a variable, x, which is not marked as explicitly local or glogal and which is assigned to in a top-level scope construct is local or global: x is global if it is accessed before being assigned on all paths through the scope body. In other words, x is local unless there’s no way it could make sense for it to be local. Or…

And plenty of others.

Also note that both your examples are currently working in IJulia, since it uses Steven’s SoftGlobalScope.jl by default.

Thanks for your kind reminding! The example code works in IJulia. However the following code does not work in IJulia which seems very odd. This is the reason why I re-tested the simple code in console environment.

The error is as follows. 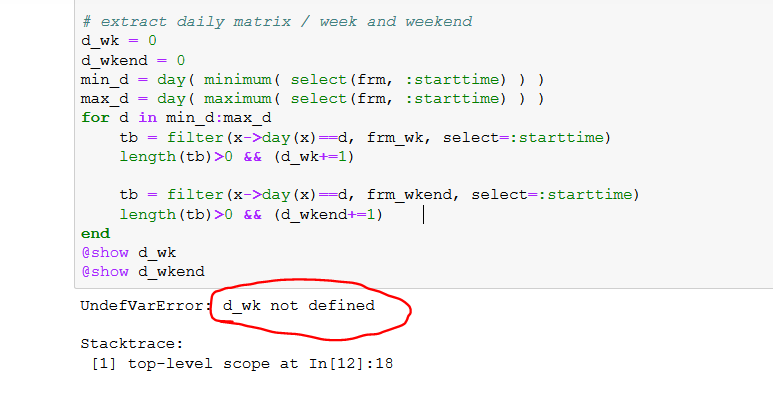 I’m not sure what’s happening there; that should perhaps be filed as an issue with SoftGlobalScope.jl.

I agree that simple is better than complex, but please remember that simple is not the same thing as easy. Easy is what you’re used to or expect. Simple is having a short formal description. These are often in conflict. For example it would be very simple to say that every new variable must be introduced with a keyword like var as in some languages. It would be immediately clear what each assignment does. But half the lines in your program would begin with var, which I believe most julia programmers don’t want.

It has proven fairly difficult to come up with rules that generally “do what we want” but are also simple.

@jeff.bezanson Hi, Jeff, Thanks for your excellent work on Julia language. I totally agree with your viewpoint. Simple and good-performance is usually more challenging than Complex and Good-performance.

Julia is nearly Simple and Good-performance compared with Python. I like the clean code and high-performance of Julia. Thanks for your great work!

Given how difficult it has been to come up with a good solution for the scoping issue that everybody can agree on I think starting every variable declaration with var/val (for mutable/immutable assignment) like some languages is probably the best solution. Unfortunately this wasn’t done before 1.0 and since it’s a breaking change it’s probably too late now.

I think starting every variable declaration with var/val (for mutable/immutable assignment) like some languages is probably the best solution.

Did I understand you correctly that you would prefer explicit variable definition? Like this:

I have a feeling that you belong a very small minority in this forum.

starting every variable declaration with var/val

), but users find it cumbersome.

Modern interactive languages have been making an effort to avoid explicit variable declarations.

However the following code does not work in IJulia which seems very odd.

Filed an issue with a simplified example, thanks.

Update: Now fixed in master, and v1.0.8 with the fix is tagged and will be available for Pkg update shortly.

@stevengj Thank you so much for your quick response! IJulia and PyPlot are two packages I used almost every day. Thanks for your work! Happy Christmas!