Scoping in nested functions - Why am I not getting an error?

I am confused about the behavior of scoping when using a nested function. I am using Julia 1.4.1.

It looks like there is no new scope introduced for doit. Is that correct? Can someone explain why that is, or if I am misunderstanding something?

My understanding is that when Julia compiles main() it notices that A gets defined in main(). Therefor when the child function set A it’s actually setting A in the parent context. The compiler doesn’t care when A is set just that it was set.

One way to avoid this situation is that when defining the variable prefix it with local that will ensure that the variable is, well, local. So if you did local A = ones(Int, 2) then that A would be local to doit() and you would get the expected error.

This is documented in the manual:
https://docs.julialang.org/en/v1/manual/variables-and-scoping/#Local-Scope-1

In your example, the function is defined before the variable that it modifies, but the compiler doesn’t care of that — just as in the case of variables defined in the global scope.

EDIT: Sorry, I responded thinking I had already scrolled to the end of your post, so I missed

In your example, the function is defined before the variable that it modifies, but the compiler doesn’t care of that — just as in the case of variables defined in the global scope.

Also note that one doesn’t have to assign a value to the variable in the parent function, one can just declare it via local:

I just noticed that this isn’t type stable. 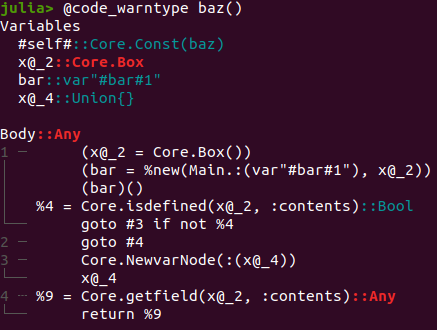 Is there a better way of doing this?

This does not address exactly what you are asking, but I think that having a closure that modifies the closed over variables is always walking on a danger zone. I would advice to simply don’t do it, and use patterns like: