Dear friends, I am a statistician and I have all my training in this area. In my PhD I worked with probability distribution generators and recently I became interested in the Julia language. I come from the R language and sometimes I “dirty” my hands with C++ when I need, in R, a little more performance.

I came across, in Julia, the package Distributions that even allows us to extend the universe of distributions, based on their abstract types and internal functions . 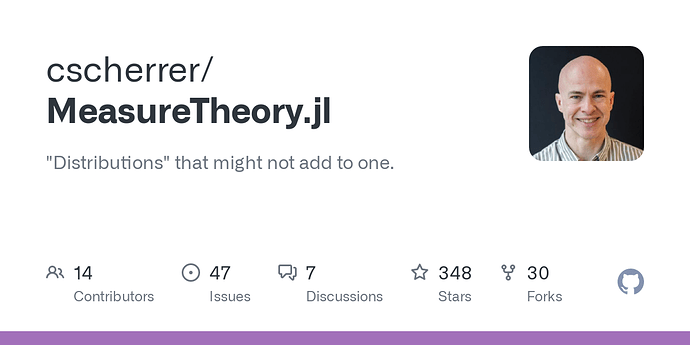 GitHub - cscherrer/MeasureTheory.jl: "Distributions" that might not add to one.

"Distributions" that might not add to one. Contribute to cscherrer/MeasureTheory.jl development by creating an account on GitHub.

And as for your other questions, there are plenty of packages in Julia related to MCMC methods or probabilistic programming. I guess these would fit the criterion of “numerical” computation or moments and other quantities?

Indeed; I also think @cscherrer 's package is worth looking at.

Thanks for the library suggestion. It really seems to be very generic and therefore very flexible. As I work daily with probability distributions, it is very tedious to use the Distributions package. There’s tremendous overhead that makes experimenting tiring.

From what I’ve seen, the MeasureTheory library weighs this, which is pretty good.

I will try to persevere in my studies of Julia to come up with libraries like this and thus convince more data scientists to use Julia.

It’s true, I thought that the Distributions package was the most famous and that I would like to get closer to the reality of use that statisticians and data scientists do on a daily basis.

Perhaps having an abstract NumericalDist type allowing more flexibility of use and some packed numeric routines to work with the generic distribution, making it easier to experiment:

1 - Introduce a new distribution easily, without great demands;
2 - If the type is NumericalDist, the basic properties can be estimated numerically;
3 - Generate observations by alternative methods, such as the acceptance and rejection method. In many practical situations, we don’t have F^{-1};
4 - Easily estimate the maximum likelihood estimators, returning whether or not there was convergence. This would allow within a Monte Carlo simulation, an iteration to be easily discarded. Of course, the tuning could be done separately by packages like Optim.jl and the discard could be done easily in case of non-convergence or less in case of error, as we can use error handling. However, I think it’s positive to make things easy to use. Companies like Rstudio Ltda, which will now be called Posit Ltda, have been very successful in their tools, as they value the ease of experimentation.

I’m not an expert in distributions so I’m not sure I understand exactly the needs discussed here, but do you really need Distributions.jl to change in order to do what you mention? Can’t that be implemented in a separate package which should just define new distributions that implement the Distributions.jl interfaces? The strength of Julia is that there’s nothing special about Base or classic packages, you can extend them with the same performance from other packages.

The reason for my speech is that it would be very convenient to have this functionality in Distributions.jl, as it would fit well in the package that is perhaps Julia’s best known in this topic.

As for the possibility of implementing and doing it outside the package, or even creating another package, of course it is possible. What I’m arguing is that Distributions.jl could incorporate the current designer and allow a more flexible designer with some numerical computation routines on probability distributions. This would most likely duplicate the use of the package, allowing, for example, the generic implementation of a probability distribution that could be handled numerically, as well as allowing rapid experimentation with new distribution families.

I really do think MeasureTheory is what you’re looking for. If not, maybe take a look at the packages that import GitHub - JuliaMath/DensityInterface.jl: Interface for mathematical/statistical densities in Julia

I don’t quite understand your concerns. As far as I know, Distributions.jl does not require or enforce that closed formulas are available. In the end, each distribution just has to implement a small interface for sampling, density evaluations and the like.
Indeed, rejection sampling or numerical methods are already used in some/many distributions. Just check for instance the implementation of the von Mises distribution or even the standard normal. Even if the quantile function happens to be known analytically it is often more efficient to sample differently, e.g. using rejection sampling. For the standard normal, the quantile function can be approximated numerically - it is not analytic as far as I know - and sampling is often done via the Box-Muller transform or the Marsaglia polar method - a form of rejection sampling.

Guess you could just implement (parts of) the interface for the distributions you mentioned in a similar fashion … and maybe open a pull request.

Thanks for the feedback.

I’m thinking, at some point propose something. As soon as I have more time, and I finish the classes I’m teaching and the theses I’m supervising, I want to see something along these lines. Maybe even in partnership with a student.

For example, one could easily use the package to obtain the maximum likelihood estimates of any distribution. It is possible to implement, using closures and varargs functions, a generic fit function that takes any probability density function. A tuple of arbitrary size would be useful, as we would not know how many parameters of the probability density function that the function user would pass as an argument to the fit function.

I will end this thread with @baggepinnen’s suggestion which seems to be the most convenient for my question. If eventually I come to do something along these lines, I will return here at some point.