ModelingToolkit - the concept of "state"

I’m a little confused about the use of the word “state” (not only in ModelingToolkit). In classic dynamic systems theory, the state is the minimum information necessary to describe current time of a dynamic system, so that the model evolution (with model parameters) is uniquely described when the state + future inputs are specified.

Macroscopic models based on balance laws can often be described by semi-explicit DAEs of form:

Sometimes, an output is added:

Here, the unknown variables are x and z (and possibly y), while u is a known input.

It may be convenient to classify “x” as a differential (or: differentiated?) variable, and z as an algebraic variable.

Some documentation (not only MTK) suggests that (x,z) is the state. But this is not so if we use the classic definition of “state” as the minimum necessary information.

In DAE literature, it is common to denote (x,z) as the descriptor of the system (my books are still in boxes after changing office…, so I can’t find references right now); alternatively, the unknown variables.

Ascher and Petzold, in Example 9.7 gives a stylized model of a 2D pendulum, constrained to move on a circle:

where L(t) is unknown together with q1, q2 (positions) and v1, v2 (velocities). What is the state of this system? Is it the variables (q1, q2, v1, v2, L)? Or something else? The state should probably be the “differential variables” after index reduction.

Using MTK, the model is: 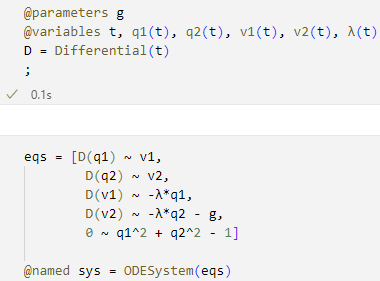 and function structural_simplify leads to:

Inspecting the resulting simplified model from structural_simplify, some equations must be missing. Yes, we can compute q1 when q2 is known (fourth equation, with an assumption of sign), but we cannot simultaneously compute q2_tt and L from the third equation. And what about v1? In Ascher and Petzold, they propose both:

The first of these two additional equations gives us v1, while the second gives us L. Finally, we can compute q2_tt from the third equation provided by MTK.

Both of these additional equations are necessary, but structural_simplify doesn’t spit them out.

[And… am I doing something wrong wrt. structural_simplify in that 2 equations appear to be missing?]

Some documentation (not only MTK) suggests that (x,z) is the state. But this is not so if we use the classic definition of “state” as the minimum necessary information.

The splitting of x vs z is not necessarily possible in higher index nonlinear scenarios. We thus say that it’s MTK’s job to figure out which of the variables are observed values, states, and it’s MTK’s job to determine which ones are what and whether to treat certain objects as diffferential or algebraic (which is really just a distinction for initialization).

Both of these additional equations are necessary, but structural_simplify doesn’t spit them out.

full_equations(sys). Those equations are not necessary because they are eable to be easily eliminated.

The resulting model has two differential variables and has been index-reduced. So from classical dynamic systems theory, the system has two states = required initial conditions, and this is also true for the original system with 4 differential equations and one algebraic constraint.

OK— perhaps the thread becomes too long. But I have pondered more on this 2D “pendulum” model from Ascher and Petzold… to recapture:

is the encoding of the model: 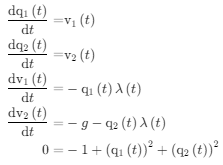 After some “tedious” manipulation and by eliminating \lambda, I find that — with states q_2 and v_2, the model can be re-formulated as:

It is obvious that this system has two states, and it should be trivial to solve it with any ODE solver… except we will have problems for q_1 =0… Perhaps a solution could be to replace q_1 ^2 \rightarrow q_1^2 + \epsilon. If we need \lambda, we can find it from:

If I try to solve the above “manipulated” system as an ODE by coding my own function for the differential equations, I get 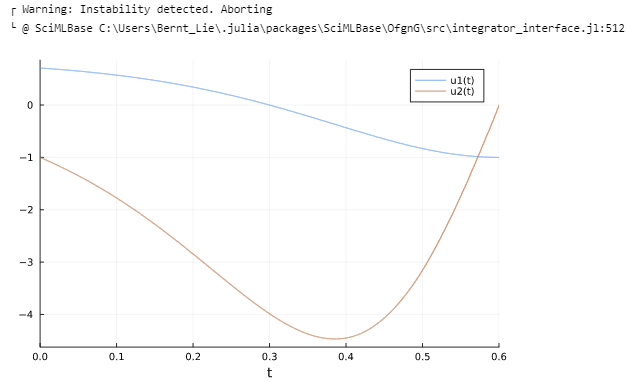 Perhaps I need to tweak tolerances? Specify another solver?

For comparison, here is the similar Modelica code [Sundials solver?]:

which gives the solution without problems: 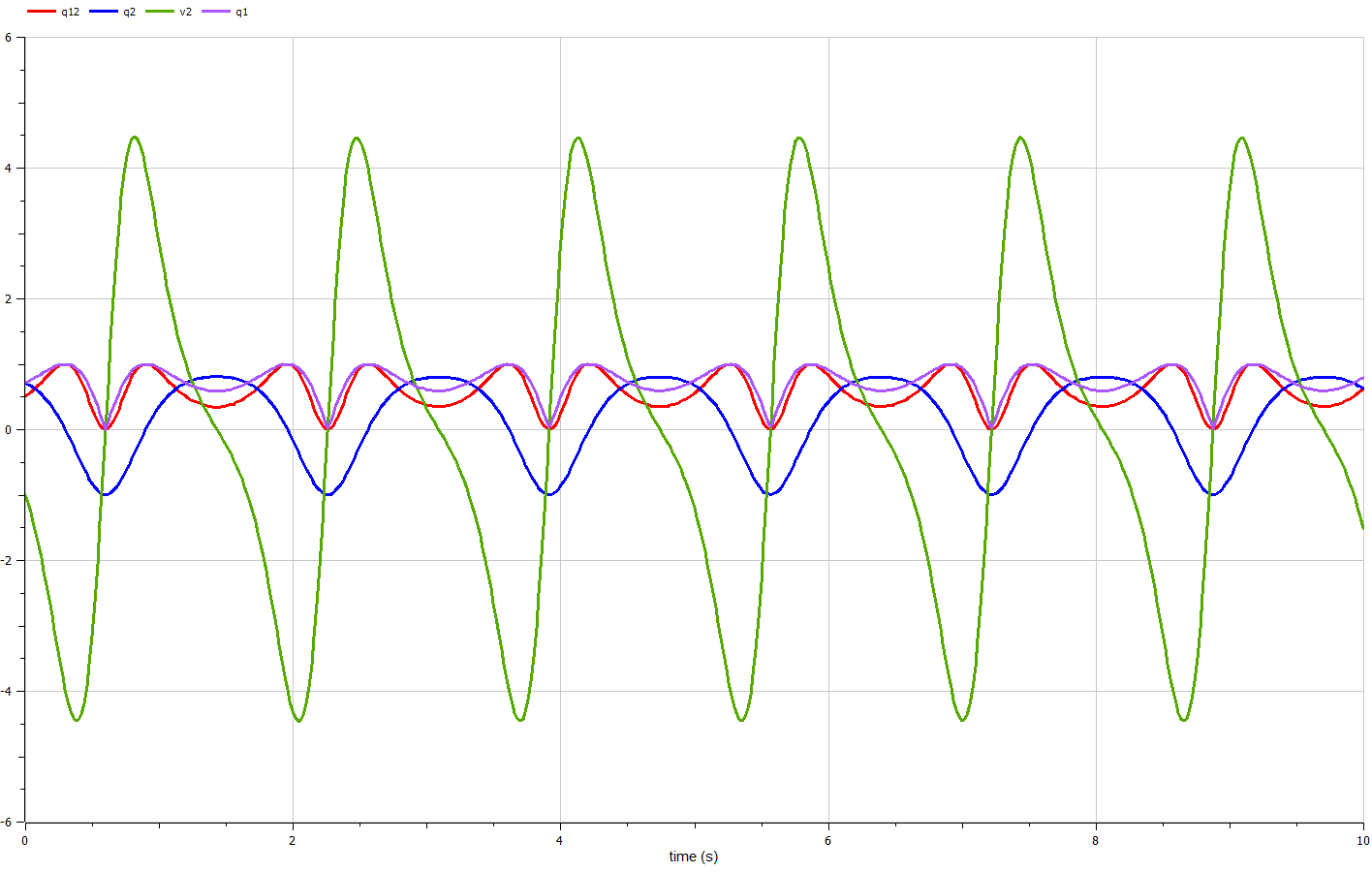 If I try to solve the problem using the MTK model, it seems like I need to specify 4 initial values (although there clearly is only 2 independent initial conditions, i.e., 2 states…)

I think 2 instead of u2 here for the crash, though fixing it there is still the instability making for an aborted solve.

If you only give two initial values, you can’t really decide q1 though? I guess the simulator will decide positive or negative initial value for you, and I guess that does not really matter, if you wanted it the other way you can just negate the solution.

If you only give two initial values, you can’t really decide q1 though?

Yeah, that is probably true. I do think the solution is “unphysical” considering it a pendulum, though. q1 should not bounce back from q1 = 0 coming from above. I may have to use callback and use the velocity v1 (not computed above) to determine the physically correct root.

Anyways, my main “concerns” are:

Hm… if I implement the structural_simplify model from MTK in Modelica, the result is identical to what I get with my own further simplification (simulation results above) — except that it crashes after 8-9 seconds.

However, if I implement the original model as given in Ascher and Petzold:

I get the physically correct result (also for q1): 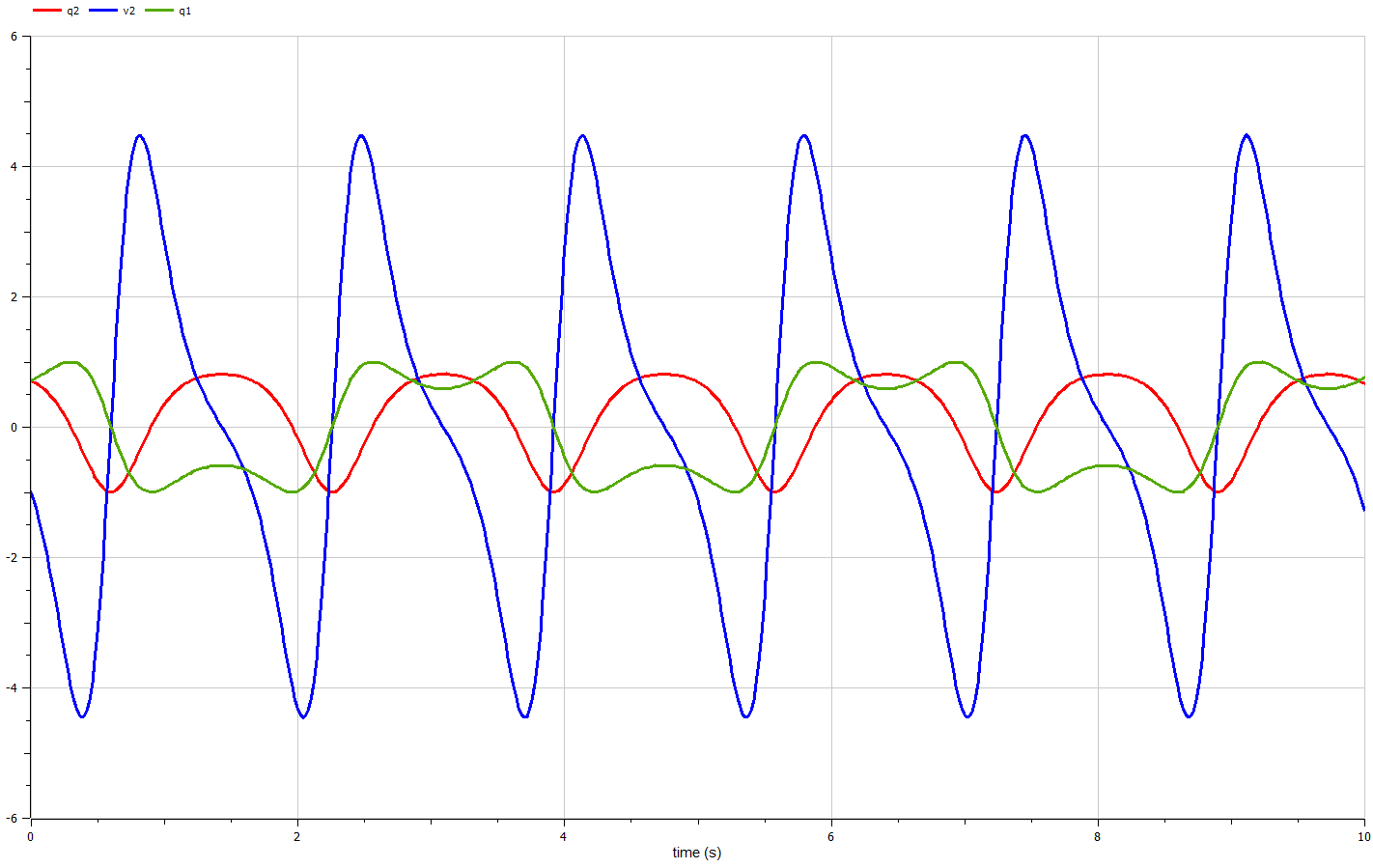 Observe that this time, q1 (green curve) passes through zero and can become negative.