I am also using vim (actually nvim-qt) and tmux, running in two different windows, which maybe is simpler to set up and, for me, has a more flexible layout.

In one window I have nvim (nvim-qt);
In a terminal I execute tmux and then julia.
It doesn’t matter which one (vim or tmux+julia) you run first. Once you have both vim and julia running, you can execute julia code from vim with ctrl-c-c, which pass to julia REPL the block of commands delimited between empty lines, or the highlighted code.
On first execution you are asked to choose “tmux socket name”: you can accept the default, and also the “tmux target pane”: just press enter.

To sum up, run vim/nvim in a terminal (or gvim or nvim-qt) and tmxu+julia in another terminal, which is accomplished with the following commands:

OK. Now I’m using tmux on iTerm2. What follows is a screenshot of my terminal after trying to run :SlimeConfig. 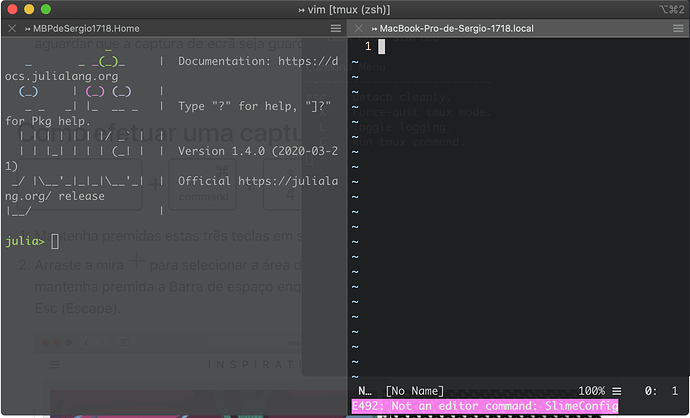 I am trying to set it up along and you havent succesfully installed vim-slime. I had problems using vim plug so I switched to pathogen. Also I am not using ipython-cells (just slime). I do have a problem configuring slime to send to the second tmux pane though.

You’re right. I didn’t install pathogen.vim . I read something about it and I think that it is a lot difficult to install.

Is there something similar for tiling window managers instead of iterm or tmux?

Yes that was what I did. See https://coderwall.com/p/el3fbg/split-window-with-iterm-2

Is there something similar for tiling window managers instead of iterm or tmux?

I use vim with vim-slime and kitty in i3wm (and coc to have some nice LanguageServer.jl features).

Edit: I just looked again into the options of vim-slime and found dtach to also work nicely with a tiling window manager.
Edit2: The current implementation of vim-slime for kitty uses remote control within windows, but alternatively it would be interesting to use it via something like kitty -o allow_remote_control=yes --listen-on unix:/tmp/mykitty and then from within vim kitty @ --to unix:/tmp/mykitty send-text "bla".

I got my setup working by now:

I have installed pathogen and vim-slime; I opened tmux using iTerm2 on Mac and made a second pane.
I have inserted the following lines on my .vimrc.

and now it works finally.

@jbrea could you point to some resources for setting up coc with LanguageServer.jl?

Would be really nice if it was as easy as the other coc extensions.

I have julia v1.4.0 and LanguageServer v2.0.0 and this in my coc-settings.json (open in vim with :CocConfig)

Wow @jbrea this is very nice!

@FirstnameLastname Can you share your config to make it send cells to repl?

You can use this plugin made by @mroavi. It’s easier and cleaner than my setup.

@FirstnameLastname, I love how your setup looks. Are you able to share your config/dotfiles?

I have a jl file open, open a h-split and with Neoterm open a terminal. I want to use kitty-navigator (plug-in similar to Tmux-navigator, which is also a great plugin for those of you who wish to use Tmux) to move between screens but for whatever reason when I type your “blah” containing command into the new terminal I just get an error.

If everything is within the same kitty window I don’t think you need @ --to.
For some context where @ --to may be useful, see this issue.

Can’t you just use the :T command of neoterm for your setup?

I could, and do, but launching Julia from within a terminal within Nvim is actually slower than opening a new kitty window/pane within the kitty os window and launching a Julia repo from that. My MacBook is a good 8 years old at this point & I want to be as efficient as I can. (Hence the learned use of Neovim, Lua, and the terminal in general rather than relying on bloated VSCode… though I do use it from time to time when work just needs to be done). Side note: Figured increasing my cmd line fu would make me an overall better programmer/data sci dilettante than just learning one editor.

In relation to many of these setups: I have been using the Vim \rightarrow vim-slime \rightarrow Julia REPL setup and it works great, especially with the Vim :term option as you can also then pass REPL lines back to Vim.

One non-criticial issue that persists is that sending lines that begin with tab characters (i.e. a lot of lines!) can freak out the REPL somewhat and cause it to dump all Base exports before executing a line. This becomes particularly overwhelming and gluggy when you try and send a big chunk or even the whole script file.

Has anyone else experienced this or come up with a nice way around it? I note that there are two related issues open on the Julia GitHub here and here. It seems to be tied to the fact that <tab> <tab> in an empty REPL “autocompletes” everything . I’ve tried playing around with tabs as spaces etc. but that makes it much harder to write readable code.

This way your code look exactly as if you use tab, but no actual tabs will be inserted.