Hey everyone! I am trying to collect information about HPC systems (from university compute clusters to supercomputers) where Julia is available as a pre-installed module and, optimally, officially supported. This is part of an effort to gather information on Julia as a HPC programming language and its prevalence in “traditional” HPC environments.

Here you will find a list of systems supporting Julia that we already have on record: 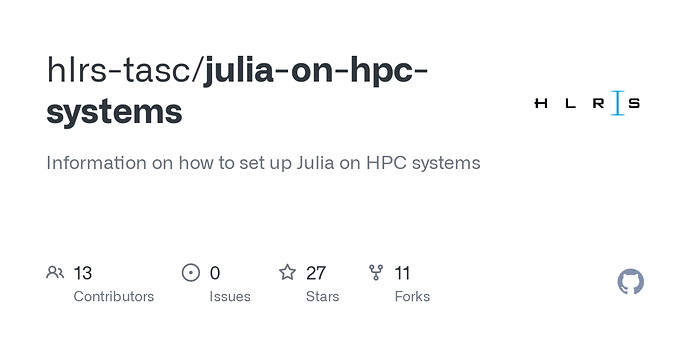 GitHub - hlrs-tasc/julia-on-hpc-systems: Information on how to set up Julia...

Information on how to set up Julia on HPC systems. Contribute to hlrs-tasc/julia-on-hpc-systems development by creating an account on GitHub.

If you are a Julia HPC user, a system operator, or just someone who knows about their university’s/company’s Julia efforts, it would be great if you can contribute your system to the list. Optimally by creating a PR with the information you know (it does not have to be complete), or, alternatively, by replying to this thread. Thanks!

I’m very interested in the comments about the negligible performance gains of building from source vs using official binaries. I guess this is worth a thread in itself.

Keep in mind that julia is a compiler itself: the performance of the code it generates shouldn’t in principle depend much (or at all?) on how it was compiled, by default it compiles natively for the target system in any case. That said, by doing a native build what could improve is performance of the runtime (compilation latency, garbage collector, etc…), but depending on workload you benchmark this can have varying impact, sometimes negligible, other times more significant.

This recent pull request:
https://github.com/JuliaLang/julia/pull/45641
adds support for doing PGO and LTO to Julia build system. As I said in the thread linked above, there is some improvement in terms of compile latency (which I guess everybody would be happy about), and Julia’s own runtime, but the code generated by Julia is still the same

Thanks for sharing @giordano! I am watching this PR now and once its merged and part of at least a release candidate, I’ll give it a try in an HPC environment to see what kind of speed difference I can get.

The pull request only adds a Makefile, not sure it’s worth waiting months until it makes it in a new release, you can copy it and follow the instructions