Suppose I’m creating a non-linear structure in a 20-dim space. Right now I have a vector

For one, those two lines won’t compile. m is a 1-element vector, so calls to cos(m) and sin(m) will fail.

And, if you just repeat that 20 times, you’ll only overwrite your vector 20 times.

And, also, what’s a non-linear structure?

My current code is 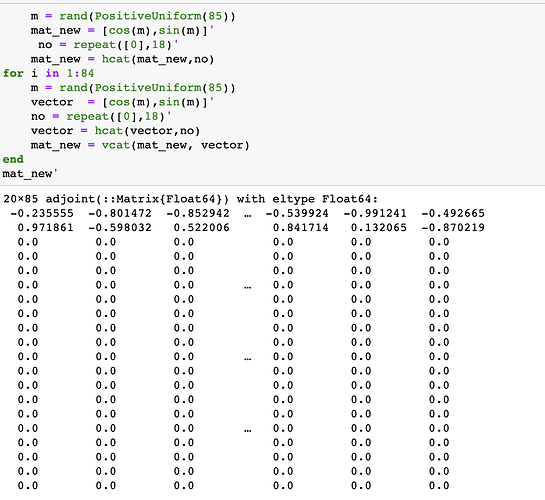 So what’s the question? It’s an array. 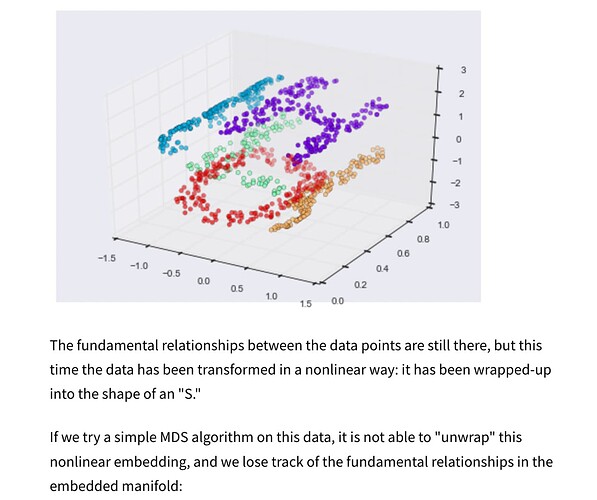 I think you’re saying you’d like to create points on a 2 dimensional nonlinear manifold embedded in 20 dimensional euclidean space?

It’s embedded in another space if it’s like the earth, a 2D surface of the earth but in a 3D world (or 4D if you include time)

then it’s defined by the values of t and s… that makes it 2 dimensional. but it’s embedded in N dimensional space because the vector has N entries.

Yes, I really appreciate it. If I get it correctly,

This is a 2-dim non-linear manifold in 20-space, since there are t and s (2 variables) and the vector has 20 entries. So in my example, I can get

If I want 3-dim, just add a new entry like

well, yes. but many times the manifold spans the other dimensions too. Like if you just take the two first entries in your vector you’ll have all the information you need. But in the case of say a sphere, if you have its surface points in (x,y,z) coordinates, taking just (x,y) doesn’t tell you everything you need to know about the surface.

So it depends on what you want. In some sense your example is trivially embedded in 20 dimensions, but sometimes it’s nontrivial. for example

is two dimensional (there is a t, and an s that determines everything) but you can’t just look at the first two entries, or any two entries, to find out everything.

those are nonlinear functions of t and s so yes the resulting points are not lying on some linear structure… For example if you double t you do not increase the values of the entries in your vector by a factor of 2.

Consider a function from \mathbb{R}^2 \to \mathbb{R}^{20}, i.e., for the sake of argument let’s take a linear one, but you can easily replace it by something non-linear, e.g., some neural network:

Note that even though each point of points20D is 20-dimensional, it is actually determined by two values alone, namely the original 2-dimensional point which was passed through emb. In this sense it is a 2-dimensional structure as it actually only has 2 degrees of freedom, i.e., independent degrees of variation.

Now, when adding noise to that structure, i.e.,

Disclaimer: The above explanation is supposed to give an intuition. I have deliberately avoided terminology such as embedding or manifold which require quite some mathematical background in order to define and understand properly.

Yes, thank you, I wanted to say something about this, but wasn’t really sure what to say, your explanation was excellent.

(When the noise is small compared to the variation induced by the original 2-dimensional points, we can still consider it close to a 2-dimensional structure though).

Also this is a really good point, because often we’re talking about noisy measurements that are close to a manifold not points exactly on a manifold.

For example randn(100) will give 10 points in a 100 dimensional space. But the radius of the points from 0 will be somewhat close to constant:

The points are all near a radius 10 “spherical” surface in 100 dimensions.

If we want to know where the vectors are, we’ve got 99 problems but the radius ain’t one (sorry, couldn’t resist).

Yes, this should be a well known property of high-dimensional normal distributions. It seems more of a concentration of measure phenomenon though … not quite sure if or how that connects to the idea of lower-dimensional manifolds?

Ah yes, was thinking about manifolds with dimensions \ll N instead of N-1. Nice example though, should be more widely known.

Yes, you run into these manifold issues a lot in sampling high dimensional probability distributions. In the example actually if you restrict to the first 50 dimensions, the same thing is true, the points are near a 49 dimensional spherical surface, with somewhat more wiggle in the radius. Same with the second 50 dimensions, so in some sense depending on how close is close, you can think of a 100 dimensional independent normal distribution as having considerably less than 100 dimensions.

If you set up a non-independent gaussian, like a gaussian process, you’ll sample smooth functions. Each one might be easy to describe as a Fourier series with only 4 or 5 coordinates, so a 100 dimensional gaussian can easily have as few as 4-5 dimensions that “matter”.