When will the community stop this kind of responses to genuine “perceived problems”.

When will people stop pretending the actual problems can be as easily solved by just “being nicer and talking about Julia more”?

Countless times, on hacker news and everywhere you can think of, the community as been seen as people who know best how to tell you “what you’re doing wrong” or how “you’re not using Julia the right way.”

A phenomenon that exists in every language community, and isn’t any worse in Julia than anywhere else. People will find excuses to not try a new language if they decided in advance that they wouldn’t. Denying this happens is denying reality.

And what is this obsession with Hacker News? Until I joined the Julia community I had never heard of that website, and I’ve been in the developer community or adjacent to it for more than 25 years! It’s never come up in any discussion on any other developer forum I’ve ever been to until Julia. Even to this day I have never visited a single page of that website, and I know no other people in real life who know that website (in my company, so far no one I talked to had heard of that site before I mentioned it). Isn’t the Julia community hanging far too much weight on something that is effectively marginal?

Julia isn’t getting the adoption it ought to be getting judging by how powerful the language is. I see this as a problem (often like calling it “challenges”) and as the author of the thread pointed out, he also sees it as one and wants to help. Jeremy Howard in his talk also saw it as a problem. I just don’t understand how people don’t want to admit.

I’m not saying it’s not a problem. I’m saying failing to recognise this isn’t a level-playing field is certainly not going to help solve it!

Stop giving reasons why others “succeeded”, Julia isn’t an handicap and if it cares to know what it cares, it will succeed too.

We must be positive-minded, but that doesn’t cancels seeing challenges and tackling them. Yes, “ADOPTION” is backed by “big guys”, but then “AWARENESS” isn’t. That’s the point the author is trying to make - GET THE WORD OUT THERE ABOUT JULIA.

And who says I’m not?! I’ll have you know I’m currently preparing a Julia Awareness Workshop for the company I work for. I’m spending a lot of time on this to present a positive but fair view of the language and hopefully get some people other than me to try it out. But you know what I cannot put in my workshop that I know will hurt Julia’s chances to be tried out in my company? A well-known entity, person or company, backing Julia. Or at least a well-known product built using Julia. I can show many examples of what Julia can do, but I already know that there’s nothing out there that will resonate with the people I will present to. Do you have any idea how hard it is to make people pay attention when you can’t name-drop companies they already know?!

And if you really think that having the word Google in the same sentence as the word Go doesn’t drive AWARENESS of the language, then you understand nothing at all! Name recognition drives awareness. Adoption drives awareness, not the other way round. Anyone who tells you otherwise has no idea what they’re talking about!

Every language has their own story, that isn’t our concern, we must strive to make JULIA what it deserves.

That is very much our concern, if we keep seeing them being compared to Julia, just like you did by mentioning Rust, without acknowledging the enormous advantage Rust had by sailing on Mozilla’s notoriety. If you really think Rust would have the same awareness it has now if it had just been released as an open source language by a couple of CS researchers at some university (even a prestigious one), than you understand nothing of the programming language field!

This is not a level-playing field, and the sooner we realise that the sooner we can start thinking of actual ways to solve the issue of lack of Julia awareness in this field. But failing to acknowledge that fact is just setting us up for failure, so I will NOT get shouted down for pointing it out! Especially since I’m definitely doing my part to increase awareness of the language, as much as I can given my limited time and energy. But I’m pragmatic enough to know that shouting from a soapbox will not be enough when other languages have the metaphorical equivalent of an entire radio station at their disposal.

And what is this obsession with Hacker News?

I’m not sure, but I can offer some theories. Hacker News is associated with ycombinator which is an MIT adjacent startup incubator that if I remember correctly initially funded YouTube among others (possibly also Orbitz). It’s run by or affiliated with Paul Graham, a hacker who used Common LISP in the early days of the web (1997ish) to create a store-front system that was sold to Yahoo! for enough money to let him and his partners found ycombinator which is itself named after a basic theoretical computer science construct in the Lambda Calculus.

In other words, it’s very much a caché “big name” with a subset of computer nerds heavily influenced by MIT, Common LISP, the startup tech scene, and particular tech startups founded on actually promoting new and innovative technology as opposed to fancy user interface and social media baloney.

I personally haven’t really drunk the Kool-aide (though I’m sympathetic to Paul Graham, and feel like more nerds with his success driving innovation would be good for the world) but the history is actually relevant to your point, which is that “big names” supporting a thing can drive interest and adoption.

Julia in my view, is the best guy but he’s an “introvert”. He knows more than a lot of his folks does, but he just wants to do his stuff with his “smart friends” who knows him so well.

Hacker News also gets 6 million page views per day, and millions of monthly uniques. It’s worth paying some attention to Julia’s reception in such large forums overlapping to some extent with Julia’s potential userbase.

But you know what I cannot put in my workshop that I know will hurt Julia’s chances to be tried out in my company? A well-known entity, person or company, backing Julia. Or at least a well-known product built using Julia.

How about the Covid-19 Vaccine? Have you looked at the JC case studies? Moderna, Pfizer, NASA, Cisco, NYFed, Los Alamos, Blackrock… and while they aren’t recognized names, there’s also the billion dollars’ worth of Julia-based startups.

At Julia Computing, there are more and more household names that we’re working with. You can be sure we’ll publicize them as we can.

How about the Covid-19 Vaccine ? Have you looked at the JC case studies ? Moderna, Pfizer, NASA, Cisco, NYFed, Los Alamos, Blackrock, IBM… and while they aren’t recognized names, there’s also the billion dollars’ worth of Julia-based startups .

At Julia Computing, there are more and more household names that we’re working with. You can be sure we’ll publicize them as we can.

excellent information and I have a follow up question.

I can’t see the number of julia developers in those industries. Is that information available please and if so where.

I seem to remember ( but I lost my notes) there there are 9 million python developers globally and approximately the same number of java developers. C++ seems to have 5 million and c# about 8 million.

I think it would help a lot if most of the discourse that takes place only on julialang.org could be syndicated to StackOverflow and/or other major multilanguage forums. This would also increase Julia’s rankings in the popularity indices/surveys. I think if the indices and surveys accounted for the abnormally large amount of user activity on Julialang.org, then Julia would already be well into the top 20. To make this fair, they could include the discourse on the main website for every language they measure. That data would be a lot me unstructured though. It would even make AI models for code suggestion be better at Julia. That’s going to be critical for growth of any language outside of the top 10 over the next few years.

As I started this thread I want to show I am trying to address MY issue by putting my money where my mouth is. I want to find out how a bunch of coders, who have no exposure to julia, might approach the task below.

Next month I am trying my version of the “old grey whistle” test that I use to test out a technology. I’m putting together a little task and offering the already chosen group a cash prize to solve it in julia.

I’m giving them no clues as I want to see how they approach it, what goes right/wrong and how much they enjoyed the experience. They have to code it themselves and they are on the honor system. It’s not a speed test and they can take as much time as they like.

At the end participants get to present how they approached it. We use Edward Debono’s PMI approach to gather the results. They get to pick the ranking of the cash rewards, this is done anonymously and YES you can vote for yourself.

When I ran the same test in Python ( late 90’s) we found a whole slew of things that we hadn’t considered, discovered some excellent mavens we hadn’t heard about and quite a few drawbacks that we knew could be addressed as we had seen them before.

could be syndicated to StackOverflow and/or other major multilanguage forums.

What does ‘syndicate’ mean in this context?

Anyway, aren’t Discourse and StackOverflow much too different to be able to share content, if that is what you mean?

How about clubbing together and crowdfunding/contributing to a book like this one crome graphic novel that google commissioned the very splendid Scott Mccloud to produce? 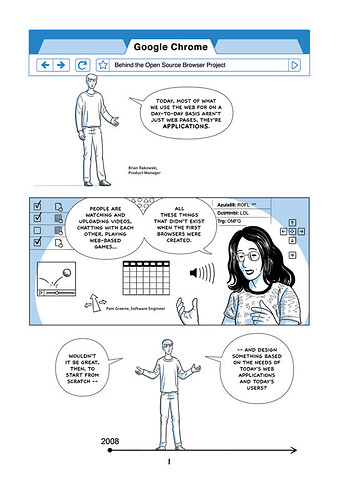 I’ve archived this topic because the OP has asked mods to delete the thread; we don’t delete threads, so archiving it is the closest option.